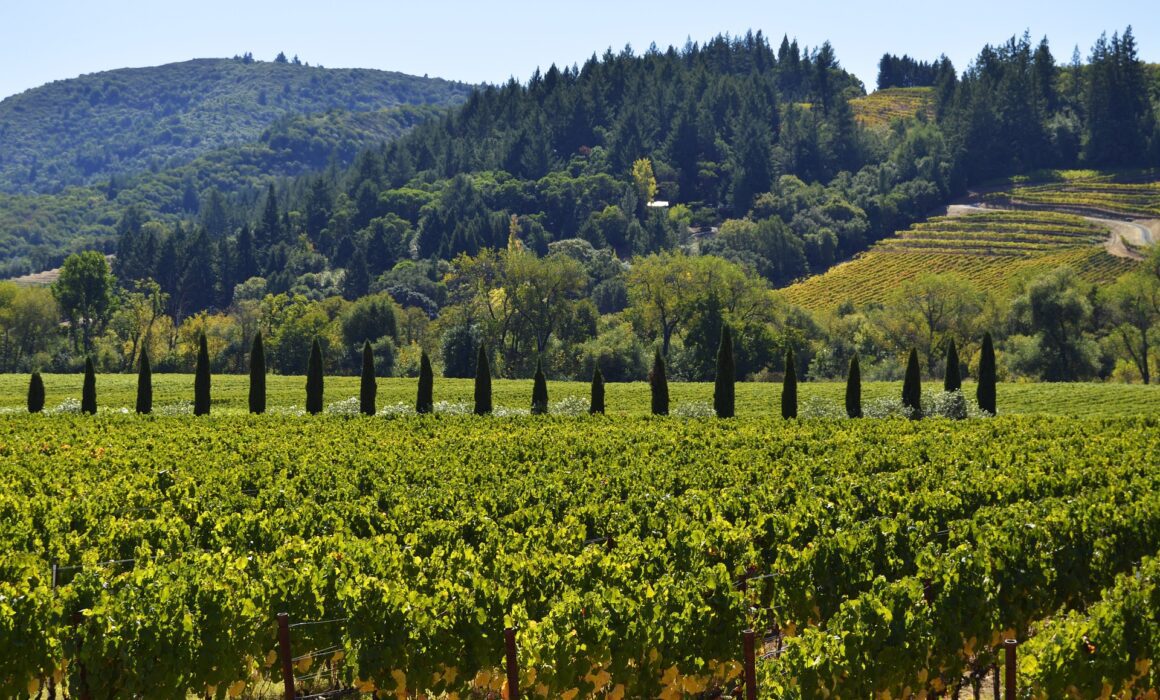 Today, the US is one of the largest wine producers in the world. California undoubtedly plays a key role in the American wine industry — the winemakers in this state create 90% of all wines produced in the country.

If you happen to be in California, be sure to visit its incredible wine regions. It may sound surprising, but the vineyards and wineries in California are second only to Disneyland in popularity among tourists!

This article will guide you through the key California wine regions and discover what makes them special. Then, we’ll share several fun facts about the most popular California wine grapes and wines you probably didn’t know.

Image by thewinemix0 from Pixabay

Let’s examine the most important AVAs in each California wine region and outline their specialty.

The North Coast lies north of San Francisco, a few hundred meters above sea level, and hosts over 50% of the state’s wineries. Napa Valley, Sonoma, and Mendocino are Northern California’s most famous wine regions.

Often referred to as the US wine Mecca, Napa Valley is the rockstar in the California wine industry. Napa Valley has favorable natural conditions for winemaking, which is why local wines have brought California worldwide fame. Surrounded by mountains on two sides and 30 miles long, this wine county has over 30 types of soils of various origins. Napa’s climate is temperate, with hot days and cold nights.

Napa’s primary grape variety is Cabernet Sauvignon, which occupies about 45% of the vineyards here. Along with Napa Cabernet, this California wine region is also notable for its reds like Merlot, Pinot Noir, and Zinfandel and whites like Chardonnay, Riesling, Chenin Blanc, and Sauvignon Blanc.

Like Napa Valley, Sonoma County is a large wine region with a diverse climate and abundant grape varieties. Located in the Southeast of the North Coast, Sonoma County offers winemakers a diversity of soils, including soils of volcanic origin. In general, Sonoma’s climate is temperate, with the Pacific Ocean providing its cooling effect.

With over 60 grape varieties planted in Sonoma, the county’s most famous varietals are Chardonnay, Pinot Noir, Cabernet Sauvignon, Merlot, Sauvignon Blanc, and Zinfandel.

As the northernmost wine area on the North Coast, Mendocino is notable for its windswept coastline. Due to its proximity to the Pacific Ocean, Mendocino county has a cooler climate.

Notable AVAs in Mendocino include Anderson Valley, famous for its sparkling wines, and Mendocino Ridge. 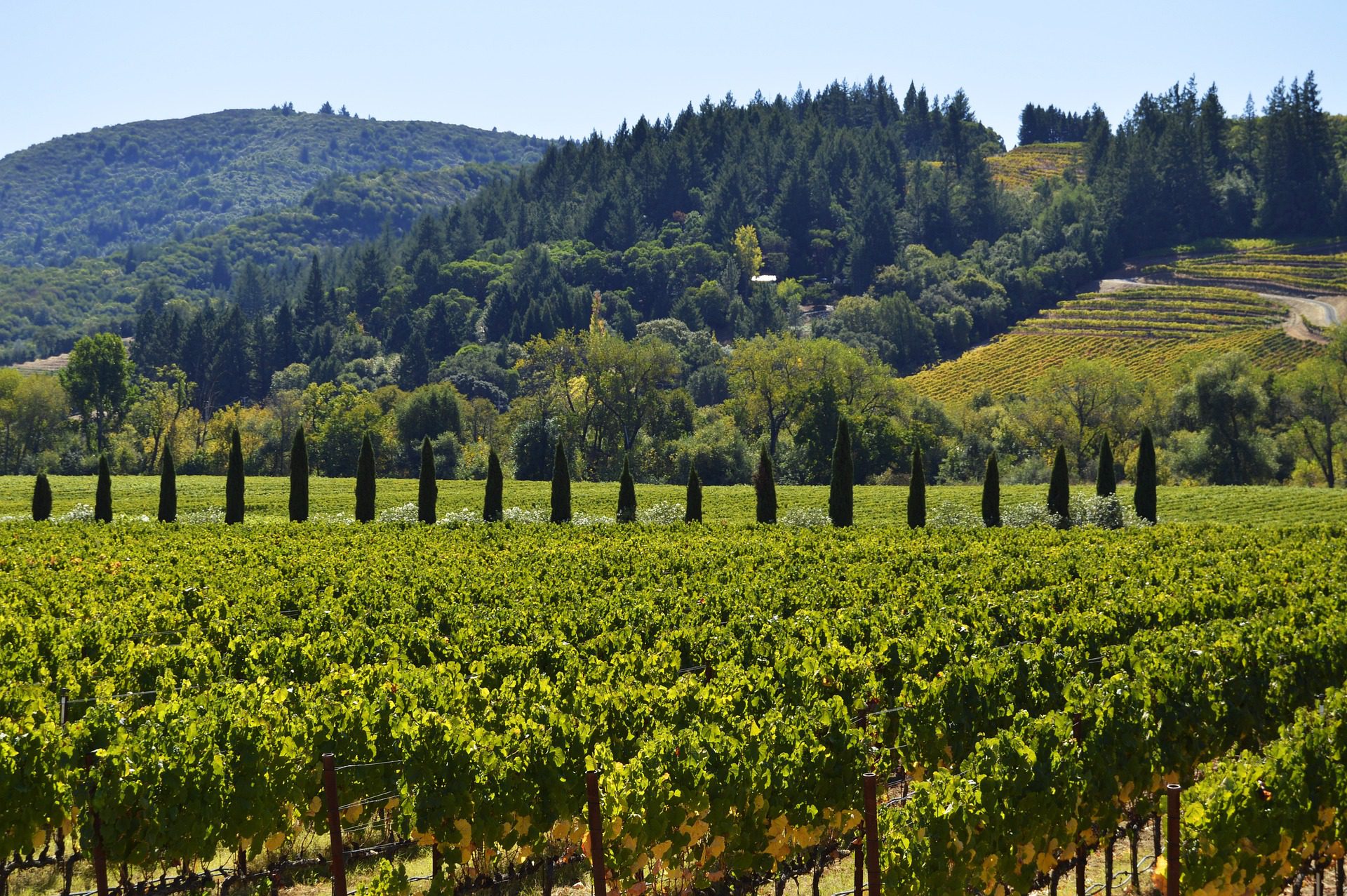 Image by Q K from Pixabay

The Central Coast covers huge territories — from San Francisco Bay to Los Angeles. The most famous wine regions in the Central Coast are the Santa Cruz Mountains and Monterey County, located in the north, and Santa Barbara County and San Luis Obispo County in the south.

As the western part of this wine region faces the Pacific Ocean, there are excellent conditions for growing Pinot Noir there. The eastern part faces San Francisco Bay, and Cabernet Sauvignon dominates here. Cultivating high-quality Cabernet Sauvignon on the Coast is quite challenging; winemakers in this AVA cope with it perfectly.

The climatic conditions of Monterey are diverse. In the northwest region, a cool climate dominates, allowing for planting grape varieties such as Riesling, Pinot Noir, and Chardonnay. In hotter areas, weather conditions favor the cultivation of Cabernet Sauvignon, Zinfandel, Chenin Blanc, and Sauvignon Blanc. Grape varieties cultivated in Monterey County enable winemakers to produce award-winning wines that reflect the complex geology of this wine region.

Santa Barbara County is a wine region that occupies the southern regions of the central coast of California. The terrain includes river valleys and gentle hills. The most well-known AVAs in Santa Barbara are the Santa Maria Valley, Santa Ynez Valley, Santa Rita Hills, and Happy Canyon of Santa Barbara.

Due to the variety of soils and climatic conditions, Santa Barbara County has favorable conditions for different grape varieties. That is, heat-loving grapes like Grenache, Syrah, and Cabernet Sauvignon grow well in the warm Happy Canyon of Santa Barbara. Cool-climate varieties such as Pinot Noir and Chardonnay perform well in the cooler Santa Maria Valley.

The wine produced in Santa Barbara County will have a rich taste. Along with a bright aroma, grapes growing in this California wine region maintain an optimal balance of acidity and sweetness, creating wines with lively fruit and berry flavors, spicy notes, and a balanced structure.

Because of the variety of micro-climates in the region, San Luis Obispo County produces an array of wine varieties, including Chardonnay, Pinot Noir, and Rhone-style wines like Syrah, Merlot, Grenache, and Zinfandel. That is, Zinfandel grapes perform well in the hot climate of Paso Roble, while Pinot Noir and Chardonnay grow well in the cooler climate of the Edna Valley. 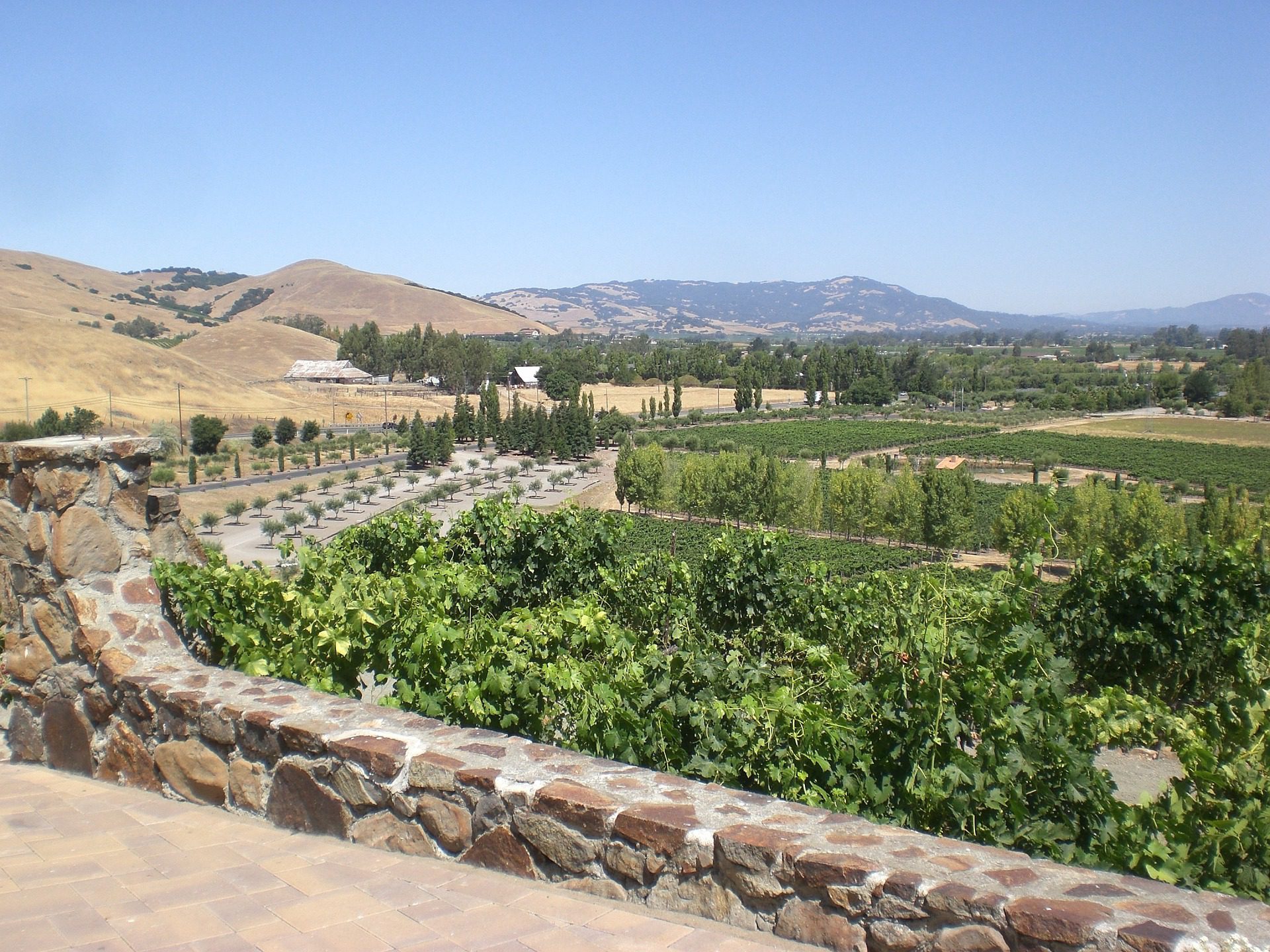 Image by Eric Simon from Pixabay

The key wine-growing regions in the Central Valley are the Sierra Foothills and Lodi.

Located between Sacramento to the west and Lake Tahoe to the east, Sierra Foothills is one of the largest California wine regions. While the climate is warm here, cool winds blow from the mountains, and the air temperature fluctuates frequently. In such climatic conditions, the grapes ripen slowly, allowing winemakers to create drinks with a rich flavor bouquet.

Lodi is one of California’s largest and oldest wine regions in San Joaquin Valley. Lodi has a Mediterranean climate, where the ocean breeze has a cooling effect on the vineyards, and hot, sunny days give way to cool nights.

The South Coast of California stretches from Los Angeles to San Diego. Since it is very hot in Southern California, winemakers locate their vineyards on western-facing slopes and close to the coast or high in the mountains.

The Temecula and Antelope Valley are notable wine regions in Southern California.

The Temecula Valley is a wine region with over 40 wineries. The region is home to a wide array of grapes — from cooler-climate varieties like Chardonnay to heat-loving ones like Syrah and Grenache. Due to the proximity to the ocean, the Temecula Valley has favorable climatic conditions for grape growing. So, the wine varieties you can find here are diverse and include Pinot Gris, Cabernet Sauvignon, Merlot, and Sauvignon Blanc.

The Antelope Valley is a wine region in the California High Desert, north of Los Angeles. Summers are mainly hot and dry here, while winters are cool and snowless. In such climatic conditions, increased elevation plays an important role in winemaking.

Grape varieties planted in the Antelope Valley include Zinfandel, Syrah, and Viognier. 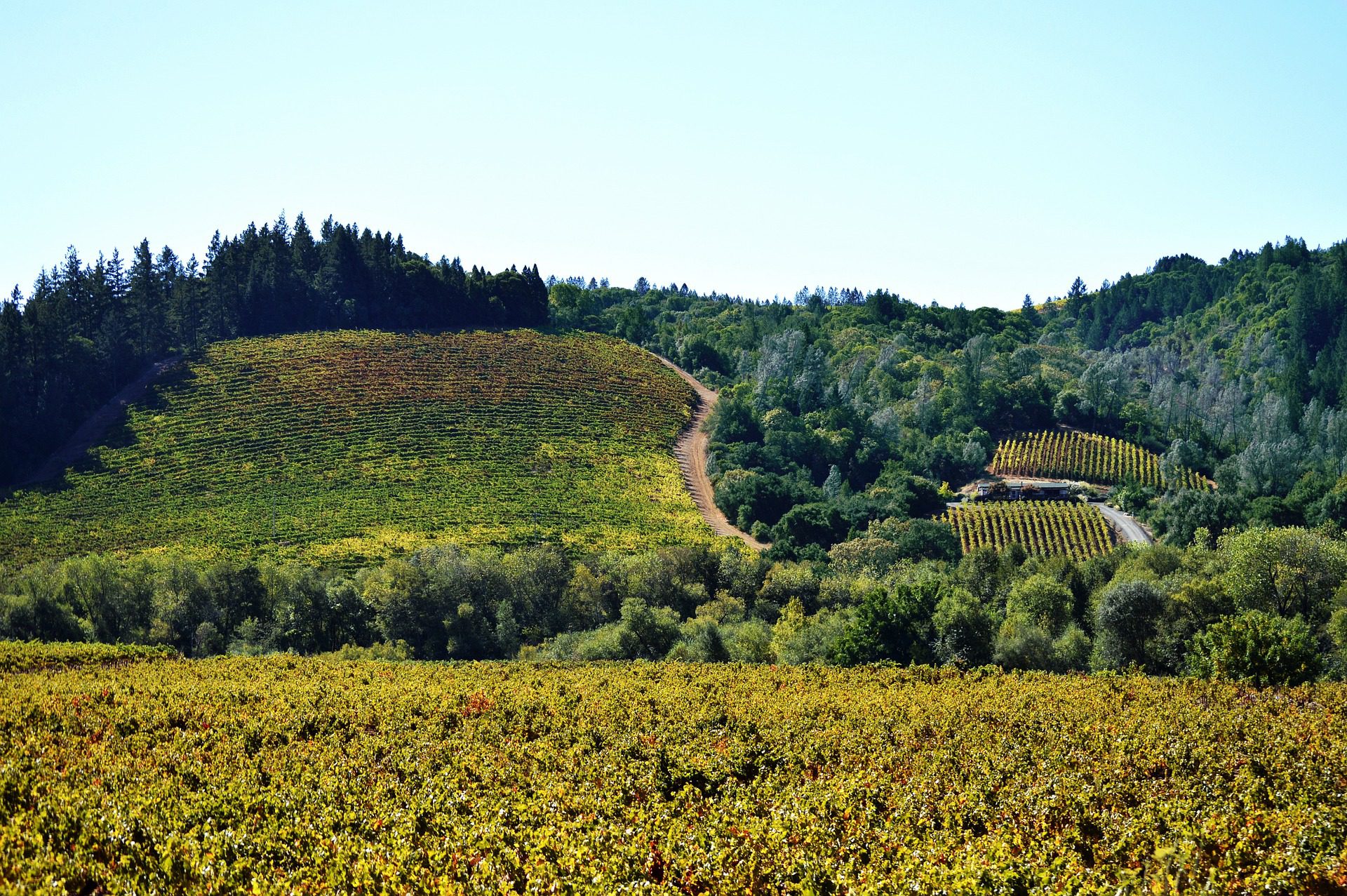 Image by Q K from Pixabay

We hope you enjoyed the journey to California wine regions. Now, it’s time for the fun facts about the Golden State.

California is famous for its sunny and warm weather. Still, the climate across the state is very diverse and can suit both cool-climate and heat-loving grape varieties. Because of numerous earthquakes, the soils in California also vary — from alluvial and sedimentary to volcanic. Due to climatic and soil conditions, California wines may come in various styles — red and white, dry and sweet, sparkling and still.

Most of the wine-growing regions have something in between maritime and continental climates. In such areas, the environment for viticulture and winemaking is close to perfect.

Sunny, warm, and dry days give way to cooler ones with breeze and fog that cover the valleys every evening, enabling the grapes to ripen slowly and evenly.

Winemaking in California started in the 1700s. Produced by the missionaries who arrived in the country, the first California wines have remained in history under the name “missionary wine.” For its production, the apostles used dark grapes imported from Mexico.

The Gold Rush that broke out in the middle of the 19th century led to gold diggers pouring into the state. As the population increased, so did the demand for wine.

Prohibition, introduced in 1918, severely damaged the California wine industry. However, after its abolition, the industry continued to develop rapidly. After a blind wine-tasting event held in Paris in 1976, the whole world learned about outstanding wines from the Golden State.

Image by Matthias Böckel from Pixabay

#3 A wide array of grapes planted

Today, there are 81 grape varieties grown in California. You can find red, black, and green grapes there.

As mentioned above, the variety of climatic and soil conditions across California wine regions makes it possible to cultivate different grapes — from famous and noble grapes to less-known ones.

It’s hard to overestimate the role of the Golden State in American winemaking — 81% of total U.S. wine production takes place in California. In 2021, the state crushed 3.61 million tons of wine grapes and produced 649.44 gallons of wine.

Why do AVAs matter? The state law requires wines labeled as “California” to be 100% made of grapes grown in California and 100% produced in the state. Wines with an AVA specified on the label must contain 85% grapes from the stated AVA. To specify county appellation, the winery must have used at least 75% of grapes from that appellation to make the wine.

Finally, California is an excellent place for wine tourism. Such tours are a great opportunity to enjoy the beauty of nature, visit wineries and vineyards, participate in wine classes and workshops, and taste world-class wines.

Here, you will find the most memorable wine-tasting experiences. All California wine regions have something unique to surprise you. For example, Napa Valley is famous for its luxury and innovative tasting rooms.

As you can see, the Golden State is rich in amazing wine regions, including widely known countries like Napa Valley and Sonoma, and the ones you probably haven’t heard of before. Whether planning a vacation in California or looking for fine wines from this state, our guide to California wine regions will help you navigate through the variety of wine styles created north-to-south.